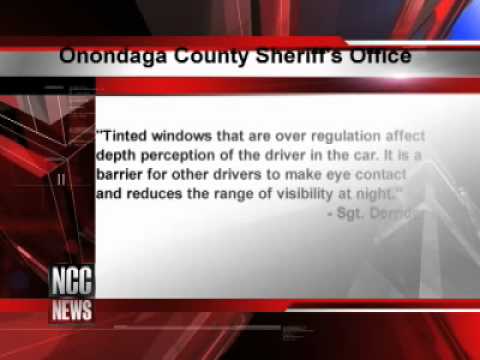 SYRACUSE, N.Y. – March 1st is the first day of a month long, county wide, police crackdown on tinted windows. This enforcement initative comes as a part of the overall police initative on dangerous driving habits where they are targeting one specific danger each month.

According to a law passed in 1992, in New York State car windows must allow 70% of light to pass through. Cars typically leave the lots of dealerships either at or close to this legal limit. As a result, adding even a thin layer of clear film could put drivers past limit. However, this hasn’t stopped many drivers from putting after-market tinting otheir windows.

“Teenagers, they get a new car, they want to get their windows tinted. Basically, it’s the first step to getting their rides pimped out,” said Bruno Natale, owner of CNY Solar Protection located on Teall Avenue in Syracuse. Drivers often put after market tints on their windows to block sunlight or just simply to make cars look more attractive. However, tinted windows can be hazardous on the road.

“Tinted windows that are over regulation affect depth perception of the driver in the car. It is a barrier for other drivers to make eye contact and reduces the range of visibility at night,” said Sgt. Derrida of the Onondaga County Sheriff’s Department.

Natale says that the police tend to crack down on tinted windows once every year. He says that so far they have received on average 7-8 appointments per day from drivers looking to get their window tints removed. However, he says that the crackdown won’t have any permanent effects.

“Once they pay the ticket, or get the ticket dimissed, they are usaully right back here putting the [tint] back on,” Natale said.

According to Natale, drivers who have “sportier” cars or cars with dark interiors are much more likely to be pulled over so he says that those drivers should use extreme caution when driving on the roads.

Window tint violations are considered an equipment violation and not a moving violation. Drivers who receive tickets can usually get them dismissed if they fix the problem within 24hours and send the evidence that it was fixed to the judge when they mail in the ticket.